For those who don't know what is a code profiler, it is a tool that measures code effectiveness and outputs statistics about the CPU usage: number of times each function was called, how much time it took to execute, where it was called from.

In the former case, Gideros Studio will display the profiling results when the stop button is hit in Gideros Studio toolbar. In the latter, you have to handle profiling data collection and display by yourself.

Note that even if you started profiling through Gideros Studio, you can still use Core.profiler* API within your code.

Let's see how profiling can help us, suppose you are running the following code:

and happen to use it very often. It is far from being optimized (on purpose, right) and turns out to be slow. How can we do better? 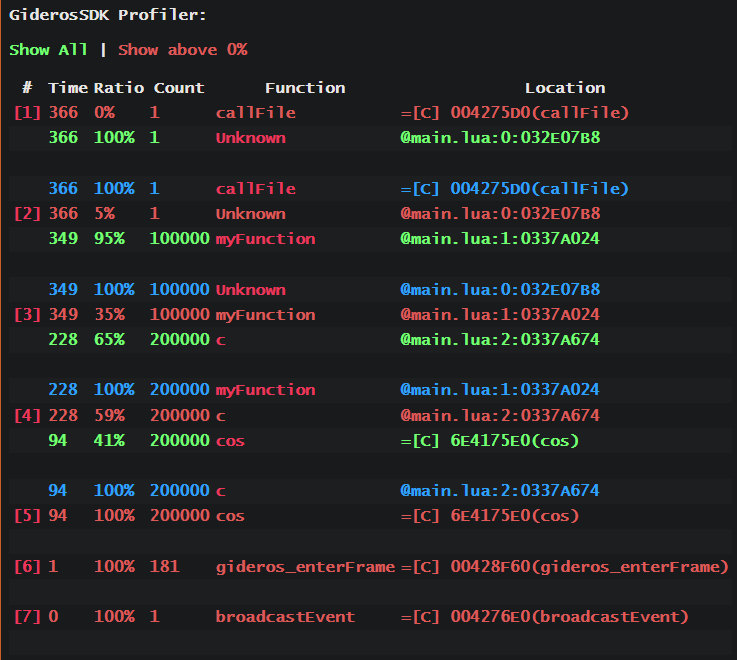 This is a list of all functions ran by the code sorted by CPU usage (highest first). The first chunk is about a function called callFile. It is an internal Gideros Function which loads each lua file. In our case it was used to launch main.lua, which corresponds to block [2].

Let's focus on our function myFunction, we can see it is covered by block [3]: 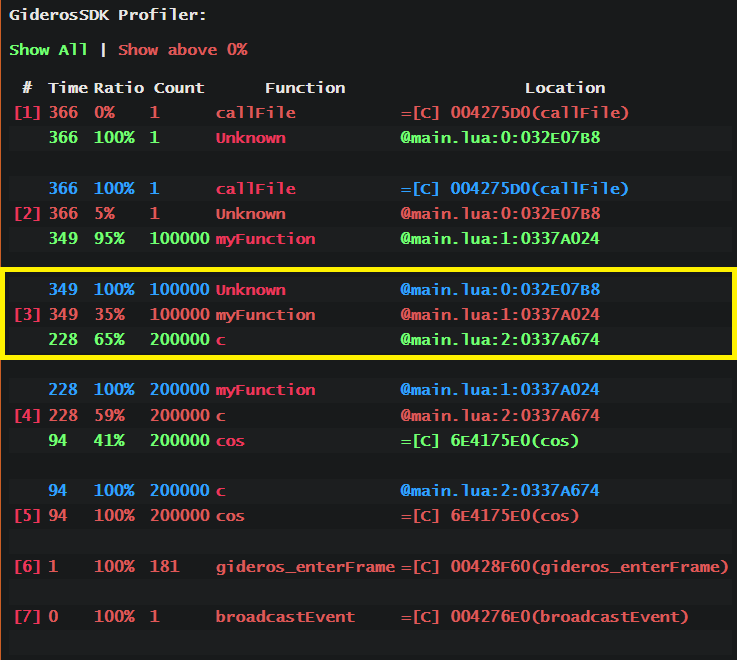 So the function myFunction took, as expected, most of the processing time. Figures tell us that it was called 100,000 times and consumed 349ms on CPU. We also learn that it was called from an unnamed function located at main.lua:0, which is the toplevel lua code of main.lua file, and that all the time (100%) spent in myFunction was due to being called by main.lua.

More interestingly, we discover that 65% of the time (228ms) was spent in calls to function c located at line main.lua:2, and that c was called 200,000 times, twice per call.

We know that calling a function is expensive, and that c function is rather simple. Lets try to inline it:

myFunction is already faster: 56ms now where we had 349ms before.

We saved time in myFunction, while cos() took the same time.

What if we use Gideros deg to rad operator instead of math.pi and 180 constant?

As you can see, the profiler is a useful tool to spot CPU bottlenecks in your app.