Gideros Studio lets you create rich games and applications for desktop, mobile, HTML5, and various other consoles. It has an intuitive and simple user interface with advanced classes like physics, accelerometer and so on.

Using Gideros Studio is straightforward - no knowledge of C, C++, Objective C, Java, .Net or any other structured, complex programming language is required. In Gideros Studio, you code using the Lua language, a simple and powerful scripting language.

Gideros Studio provides a set of functions and libraries to help develop your apps faster. Using a few lines of code, you can create stunning animations for eBooks, games or generic applications. The following is a list of Gideros Studio SDK features:

Gideros Studio builds executables directly on your host machine, without sending your application to a remote server. This saves a lot of time and energy, and you can be sure that your intellectual property will not be compromised.

Gideros Studio runs on a variety of operating systems, including Microsoft Windows, Mac OSX and Linux. Currently, the downloadable version is only for Microsoft and Mac OS X platform, but it’s possible to run Gideros Studio under Linux, using Wine. We recommend 1 GHz or more CPU, 1 GB RAM and at least 1 GB free disk space.

Gideros Studio executables run on ARMv6 and ARMv7 platforms. Minimum requirements for iOS and Android are:

There are some specific Android devices having issues to run Gideros applications, mainly those having different keys that interact with the end user. These hardware keys may not be supported. If in doubt, contact Gideros Mobile support or Gideros Mobile forums.

Gideros Studio has a layered architecture. The mid layer consists of OpenGL and C++ functions. The scripting language is powered by Lua. Lua virtual machine (LuaVM) converts the functions and callbacks to C++ functions and OpenGL, and each graphical command is drawn directly on the screen using the device OpenGL hardware accelerator. This results in very high-performance applications and games. 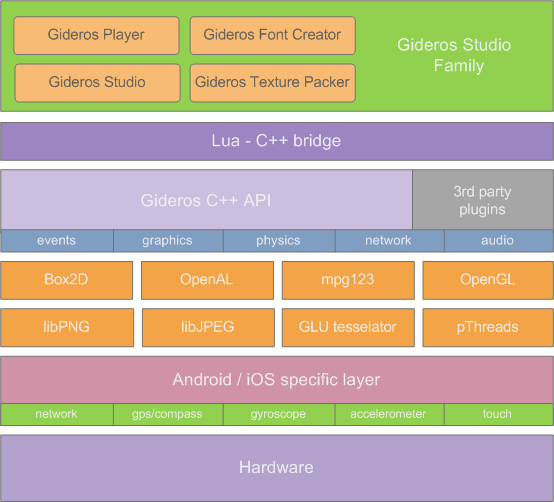 From top to bottom, the following parts constitute the whole Gideros framework:

Note: Gideros Studio for Windows enables you to build applications for iOS and Android. You can see your application running on Gideros Player, or better, see it on a real device by installing the player on iPhone, iPad or Android.

System requirements for all platforms are as follows:

That's it. Now go to Start Menu and click on "Gideros Studio".

In order to install Gideros Studio for Mac OS X, do the following:

Gideros Studio natively runs under Mac OS X and Windows. However, it's possible to run this application under Linux, using Wine. Wine takes care of mapping MS Windows functions to Linux. There are several complex MS Windows apps that run under Linux with full performance, thanks to Wine developers. First, install Wine:

If you are using the Software Center, then do the following:

Now download the latest version, and then using a command line, type "wine" followed by the application name. The installer will tell you how to proceed and locate every file to your home directory. After installation, you'll see the "Wine" menu item in Ubuntu under Applications.

Gideros Studio comes with an integrated IDE for fast application development. It has developer-oriented features like code completion, syntax color highlighting, a debugger, and project management. During the build, Gideros Studio translates your code from Lua to the targeted platform native code.

The IDE includes a few tools to make development faster and more efficient: the Gideros Player, a Font Creator and a Texture Packer.

Gideros Studio includes a comprehensive, easy to use and understand SDK, with more than 470 API functions. This gives programmers a strong, complete framework to build their applications. The following gives a brief overview of the functions list in Gideros SDK.

"Function Category" "Definition"
Event Dispatcher A central mechanism to dispatch events.
Event The objects of Event class contain information about an event that has occurred.
Sprite The Sprite class is the base class for all objects that can be placed on the scene tree. It is the basic scene tree building block.
Stage The Stage class represents the top of the scene tree hierarchy.
TextureBase TextureBase is the base class for Texture and TexturePack classes. It provides a common functionality to texture related classes.
Texture The Texture class lets you work with textures in an application. It lets you create a new Texture object to load from an image file and display in scene tree.
TextureRegion The TextureRegion class specifies a texture and a rectangular region in it. It is used to define independent texture regions within a texture atlas which is a large image containing many smaller sub-images.
TexturePack The TexturePack class specifies a texture pack (or texture atlas).
Bitmap The Bitmap class is used to display texture related objects in the scene tree.
Font The ‘Font’ class is used for fonts created by Gideros Font Creator.
TextField The TextField class is used to create display objects for text display.
Shape The Shape class is used to create and display vector graphics.
Tilemap The TileMap class is used to work with tile maps easily and efficiently.
Movieclip The MovieClip class is used to create static time lined animations.
Application The Application class contains the common functions that are available to the current application.
OS Provides an interface to the OS functions, e.g. timer.
Sound The Sound class lets you load and play WAV or MP3 sound files.
SoundChannel The SoundChannel class is used to control and monitor a playing sound.
UrlLoader The UrlLoader class is used to download data from an URL.
Timer The Timer class is used to execute a code at specified intervals.
Matrix The Matrix class specifies 2D or 3D transformation from one coordinate space to another.
b2 Includes b2.World, b2.Body, b2.Fixture, b2.Shape, b2.PolygonShape, b2.CircleShape, b2.EdgeShape, b2.Joint, b2.RevoluteJoint, b2.PrismaticJoint, b2.DistanceJoint, b2.PulleyJoint, b2.MouseJoint, b2.GearJoint, b2.WheelJoint, b2.WeldJoint, b2.FrictionJoint, b2.DebugDraw.
Geolocation The Geolocation class inherits from the following class: EventDispatcher.
Gyroscope The Gyroscope class is used to access gyroscope data.


The SDK is always improved by developers. Some of the less used functions are given as plugins, in order not to clutter the core Gideros SDK.

PREV.: Introduction
NEXT: Getting Started